Support vector machine (SVM) is a supervised machine learning algorithm which is considered effective tool for both classification and regression problem.

In a simple word, SVM tries to find a linearly separable hyperplane in order to separate members of one class from another. If SVM can not find the hyperplane for a given data set, it applies non-linear mapping to the training data and transform them to higher dimension where it searches for the optimal hyperplane. The SVM algorithm uses support vectors and margins in order to draw these hyperplanes in the training data.

Since it has ability to understand the complex relation in input data by applying nonlinear mapping, it has high accuracy compare to other supervised classification algorithms (kNN, NCC..)

Let us see a linearly separable problem as shown in the diagram below. 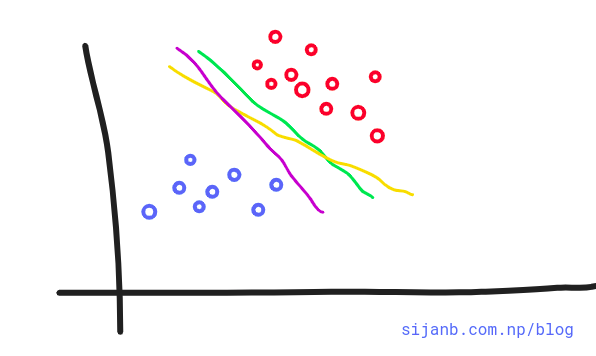 In the given diagram, we can draw infinite lines that can separate data into two different classes.

Can you decide Which of the lines (pink, yellow, green) better suits our problem? If you look closely, the green line is close to red dots and any minor change in data point may caues this point to fall into other class. On the other hand, Pink line is close to blue dots and similarly, a minor twist on data are prone to change the class of new point to other side and may misclassified.

But, the yellow line looks more stable, in the sense, it is far from data points on either side and not susceptible to the small changes in data observations.

Support vector machines help us to make a decision on this problem. If you think 'yellow' line in the figure is the optimal hyperplane for this problem, we can take this as an intuition that an optimal choice from the number of choices of hyperplanes is the one which is farthest from our training data points.

We can compute the perpendicular distances from all our training points to all possible hyperplanes and choose the one which has largest minimum distance to the training examples. The minimum distance between hyperplane and the observation point is called margin. 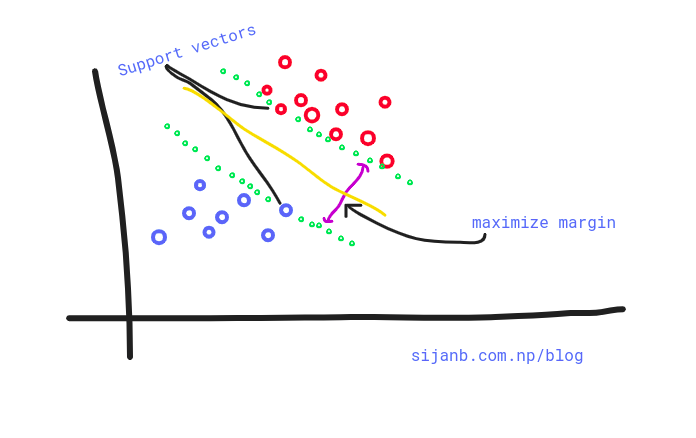 the support vectors. If these points shifted on any direction, they also influence the hyperplanes passing through the margin points and they also shifted. It is important to notice that support vectors are critical data points on our training set since they are the one defining margin boundaries.

It is important to note that the complexity of SVM is characterized by the number of support vectors, rather than the dimension of the feature space. That is the reason SVM has a comparatively less tendency to overfit.

Upto now, we are trying to find the hard-margin for our hyperplane. But, as shown in the diagram below, a single point can have high influence on our boundary. So hard margin SVM are sensitive to outliers, giving overfitted model. 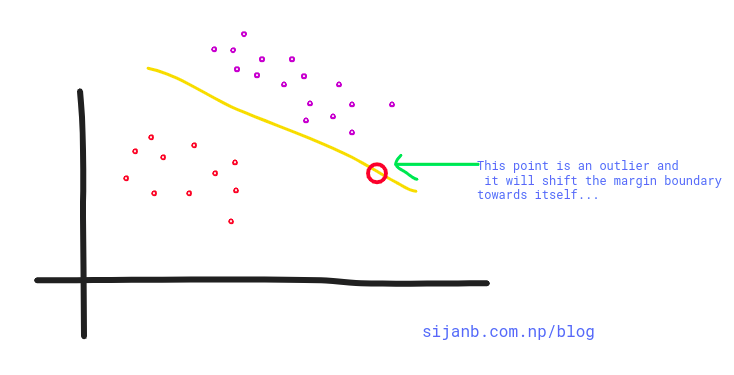 What about we relax our hard margin condition? where, a small amount of data points are allowed to cross the margins/boundaries .i.e data points can be on incorrect side as well. This approach is called soft-margin. Soft in the sense that few data points can violate the margin condition. The softness is measured by slack variable; which control the position of training data points relative to the margins and our hyperplane. The ultimate goal is, our SVM tries to maximize the soft margin. 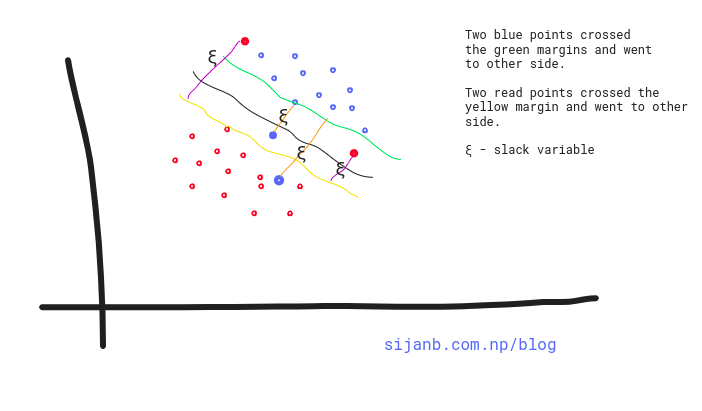 The Nearest centroid classifier (NCC) says that we should classify a data point to a class whose centroid is closest to this data point.

We compute the centroids(CTs) for each of the classes as:

a. Given a new data point $x_{new}$, compute the distance between $x_{new}$ and each centroids as

b. Assign the class to this new point which has minimum distance value.

Let us taken an example. We have to classify fruits into two classes : Apple and Orange, based on their height and width.

Now, centroids for two classes are :

Suppose, you got a new test data point : (3, 7) i.e $x_{new}$, and you want to classify this point. We can calculate the distance between new point and our centroids as:

K-Nearest Neighbors (k-NN) is one of the classification algorithms in Machine learing. Since, K-NN simply memories or stores the rules in memory, we can also say that it does not follow actual machine learning paradigm.

Before going to implementation, let us build some standard notation so that it is easier to follow the code in the implementation section (next post):

The whole algorithm can be divided into three major steps:

The K defines the number of neighbors that the algorithm will collect for making the prediction of your new data.

Let me start with an example. Suppose you have built a ML model under supervised learning which can detect faces from your family members. You simply feed all the family photos to your model. And, at the end, you would like to know how much your model learnt from your training process. 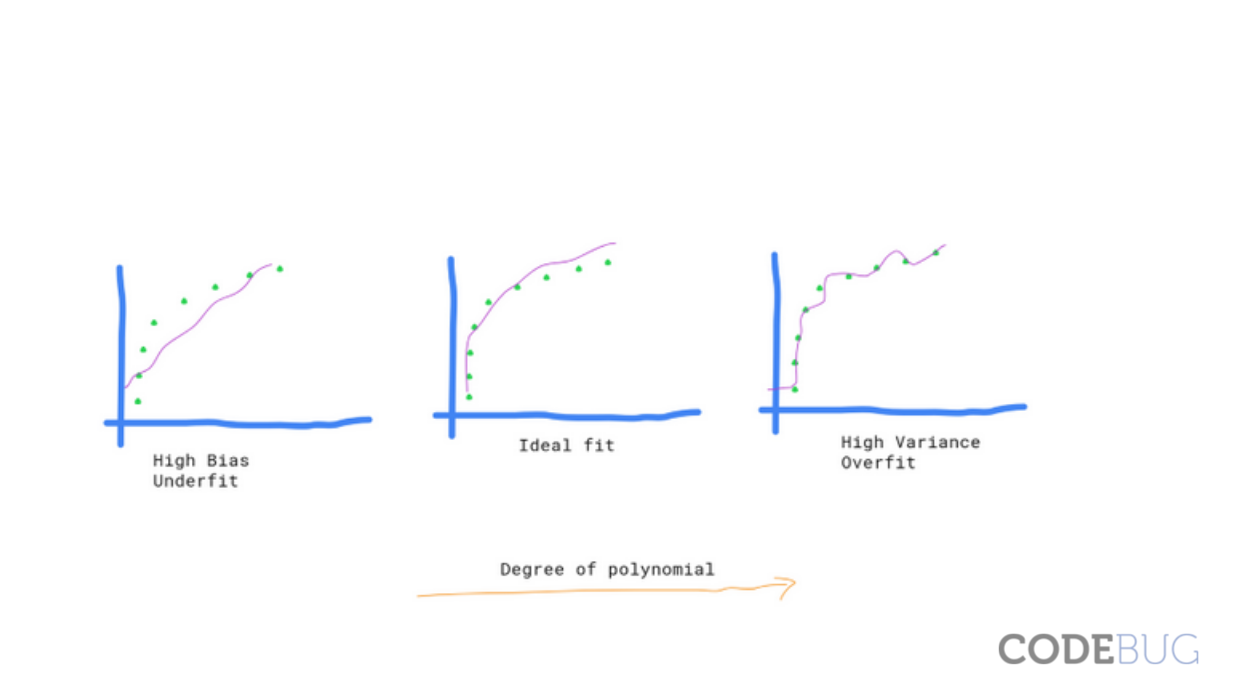 After training your model, you will find a function that maps input (image) to output labels(family members). If we represent your ML model with a function 'f',we can write this process as:

Suppose, you use 50 images for your training process and use the same images to see whether the model can predict the label correctly or not. If you found that 10 out of 50 images are not predicted well, you can say : 20% training error. If you think about the intuition behind this calculation, it is saying that 'the model is not doing well with the training data itself'. That means it underfits the data. It does not want to carry all the information available in your data.

*NOTE: If your model 'f' is a linear model than it will be really hard for your model to classify the photos using linear function.

In this post, we are going to devise a measurement tool (perceptron model) in order to classify : whether a person is infected by a diseases or not.

To build inputs for our neural network, we take readings from the patients and we will treat readings as follows :

So, input from each patient will be represented as a three dimensional vector:

So, a person can now be represented as :

When passed through activation function A(-0.5) = 0 = y1 We passed an infected input vector, but our perceptron classified it as not infected. Let's calculate the error term:

And, update bias as:

When passed through activation function A(-1.5) = 0 = y2 We passed an not infected input vector, and our perceptron successfully classified it as not infected.

Since, our first input is mis-classified, so we will go for it.

When passed through activation function A(3.5) = 1 = y3 We passed an infected input vector, and our perceptron successfully classified it as infected.

Here, both input vectors are correctly classified. i.e algorithm is converged to a solution point.

Perceptron is simply an artificial neuron capable of solving linear classification problems. It is made up of single layer feed-forward neural network.

A percentron can only takes binary input values and signals binary output for decision making. The output decision (either0 or 1), is based on the value of weighted sum of inputs and weights.

Mathematically perceptron can be defined as : 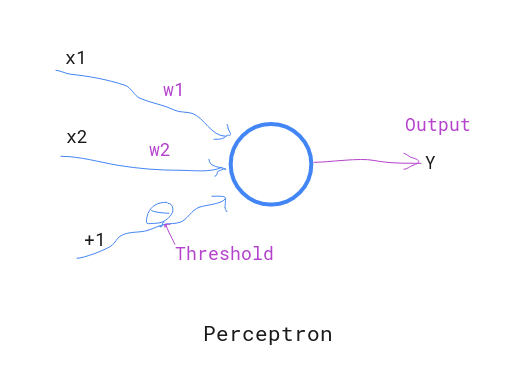 Deep learning, in simpler version is a learning mechanisms for Neural networks. And, Neural networks are computational model mimicing human nervous system which are capable of learning. Like interconnected neurons in human brains, the neural network is also connected by different nodes. It receives signals as a set of inputs, perform calcuations and signals output based on some activation value. 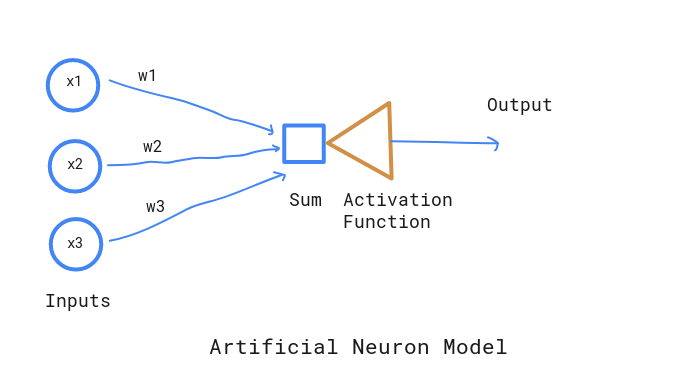 Here are some list of problems, that deep learning can solve