Peoply usually visualize the network to see cluter/ densely linked clusters and try to analyze, predict relation between nodes, figure out similarity between nodes in the network.

Figuring out the central nodes/vertices is also an important network analysis process because centrality measures :

Degree centrality is considered as a local measure which captures the direct influence of a node and its access to first hand information in the network.

For a directed graph, we can divide this measure into two:

Since the sum of shortest paths between nodes u and v will be low if these two nodes are more central and will be high if those are less central, which is opposite to other centrality measures ( for Degree centrality: higher value signify higher centrality). Therefore, it is taken as inverse measure.

where d(u,v) is the geodesic path = shortest path through a network between two vertices u and v.

NOTE : path from v to u is the number of edges along that path. 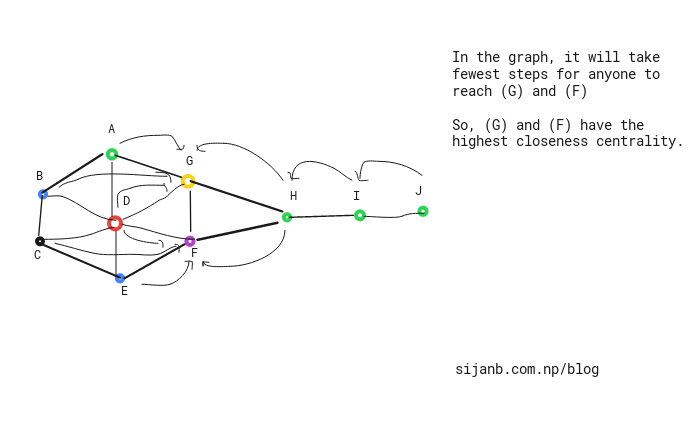 Betweenness centrality measures the bridgeness of node. It says that 'central nodes are those which act as bridge nodes'. We can calculate the number of times a node acts as bridge along the shortest path between two nodes.